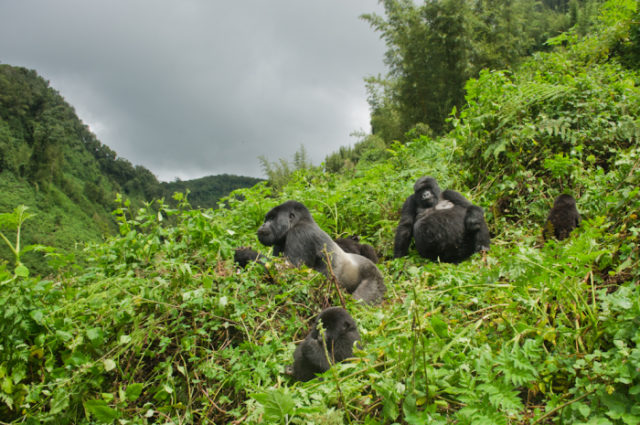 The Virunga Mountains is that straddle land that borders Rwanda, Uganda and Democratic Republic of Congo, is home to about 450 mountain gorillas, more than half of the world’s entire population (the rest of the population live in the neighboring Bwindi Impenetrable Forest inside Uganda). In Volcanoes National Park, the Rwandan part of the Virungas, twelve gorilla groups are now habituated for gorilla adventure safaris, more than anywhere else in the world.

Looking eye to eye with a large silverback gorilla, he’ll look at you with a thoughtful, intelligent gaze, aware that you’re another individual. Any apprehensions or nerves you might have had during your trek will melt away the minute you happen to see your gorilla family. Gorilla trekking adventures offer a magical encounter that transcends any other ‘wildlife’ experience we know.

Wondering about the best time to go for gorilla tours in Rwanda? Gorilla Trekking can be done throughout the year. The climbing itself can be more arduous in the rainy seasons from April – May and in November, but at an altitude of 2000m and more, and also being a rain forest it can rain at any time of the day of the year.

The most popular times for gorilla tracking are during the drier months, between December and February, and from about June to mid-September.

Inevitably, securing permits for trekking gorillas over these popular periods can be difficult at short notice, so you should plan well ahead. We will make all the arrangements for buying your permits.

A maximum of 96 gorilla tracking permits are available each day. As of 6th May 2017, the Rwandan Development Board has increased the costs of the gorilla permits from US$ 750 to US$ 1,500 per person, for a one-hour visit. The new prices aim to strengthen conservation efforts and support the development of local communities. Travellers who are also spending a minimum of three nights in either Nyungwe Forest National Park or Akagera National Park during the months of November to May are entitled to a 30% discount – reducing the costs to US$ 1,050 per person. Amongst other things, the permit pays for a 24-hour guard for each gorilla group (armed teams constantly track each habituated group – like royal bodyguards in the UK!).

How fit do I need to be to track gorillas?

You don’t have to be super-fit for a gorilla tracking safari but it does help if you have a general level of fitness, if only to enhance your overall enjoyment of the experience. Walking will be at a slow pace, with time for breaks if needed. Depending on which group you track, and the time of year you go (gorillas tend to move down the mountains in the rains), you might find yourself walking on some pretty steep slopes for several hours. On the other hand, you could reach your group after a 30-minute stroll. It’s best to prepare for the most active option however, and if nothing else, a few hill walks before you leave would be beneficial.

Whilst a gorilla trekking safari is likely to be a once-in-a-lifetime experience for you, the staff at Volcanoes National Park have been doing this for several years and run a very smooth operation, hence treks to the mountain gorillas are well-organised and clearly structured.

On your gorilla trekking day, you will need to have slept near the gorilla park because you’ll set off early enough to track to the apes inside a thick forest. Your driver/guide will take you from your lodge near Volcanoes National Park to the park headquarters. You will be attended to by excellent English speaking guides and properly informed. They will assign and take you to a specific group of ‘habituated’ mountain gorillas, which are used to humans, and known well by the guides.

After you have been divided into parties of 8, you’ll be briefed on safety and gorilla trekking etiquette, then you’ll be driven to the start of the trail to look for your mountain gorilla family group. Your guide will then lead you along generally not very clear paths up into the forest, in radio communication with the trackers that stay with the group so that they can be located. The altitude is over 2,500m, so although the pace is unhurried, the hike is tiring and can be steep in parts, taking from 30 minutes and can take up to 7 hours. Don’t be surprised if you feel a bit breathless at this altitude – this is perfectly normal.

Most trekkers are a little apprehensive – a large silverback male gorilla can weigh up to 200kg, or three times the weight of the average man, but the apprehension usually vanishes when you see the group. Often the gorillas will be spread around a small area of dense vegetation. They’ll continue with their feeding and interactions, nonchalant about their visitors, though watching you with interest. Occasionally one, often a playful youngster, will approach you with curiosity – sometimes coming so close that you’ll have to move away.

Mountain gorillas share 98% of human genes and as such are very susceptible to catching human infectious diseases, particularly respiratory ones, but they don’t have our immune system to deal with them – a common cold could eventually prove life-threatening. Various rules for gorilla trekking are therefore in place to help protect these precious gentle giants.

Only one group of eight tourists can visit one mountain gorilla family each day and once they are found, you’ll have just one precious hour in their company. If you have a cold, flu or other contagious infection, you should do yourself a favor and declare it so that the park conservationists don’t find out by themselves before you go gorilla trekking, otherwise you won’t be refunded.

Amidst gorilla family, keep a distance of 7m from the gorillas, although of course the gorillas themselves are unaware of this and will often get very close, in which case you should try to slowly move backwards.

When you’re with your trekking family group, you should try not to make sudden movements and to keep your voices low so that the group remains relaxed. Even though these mountain gorillas are now used to human presence, do bear in mind that they are still wild animals and can sometimes react unexpectedly, so always take heed of your guide’s or trackers’ instructions while on a trek.

Do not eat or drink when you’re with the gorillas.

What kit is suitable for a gorilla trekking safari? Paths on gorilla treks can be slippery, muddy and steep so sturdy walking boots are essential. Some people take thick gardening gloves because of the brambles and nettles en route and you should wear long trousers rather than shorts. A waterproof jacket may come in handy and take some water and a snack in case it’s a long trek. You might also find a walking stick or pole helpful.

For a small fee, porters are available at the trailheads to carry your backpacks and offer a hand during tricky parts of the hike. Even if you don’t really need them, hiring a porter is a helpful way to contribute directly to the local economy and chatting to them en route can enhance your experience both of local life and of your gorilla trek.

If you’re a keen photographer, taking your own pictures of mountain gorillas is one of the most magical photo sessions you’ll ever experience. Do bear in mind that the light can be poor in the rainforest and that use of flash is not permitted. You might also need to protect your camera against heavy rain.

The various groups and their locations will obviously change from time to time: mountain gorillas often climb higher in the dry season and descend during the rains, they might move on due to pressure from wild gorillas and individuals will often join other groups. When tracking gorillas, it’s possible to request to visit a specific group once you are at the park headquarters, but this can never be guaranteed. These are some of the groups currently habituated for gorilla safaris in Volcanoes National Park:

The Sabyinyo Group has about 12 individuals, including two silverback gorillas, and is usually found relatively close to the edge of the forest (about 20–40-minutes’ walk), between Sabyinyo and Gahinga.

Agashya Group, also known by its former name Group Thirteen, usually lives close to the Sabyinyo Group but can range very far and high. It has about 25 gorillas with 2 silverbacks.

Usually living between the Karisoke and Visoke (sometimes called Bisoke) peaks are the Amahoro Group, with about 17 individuals, and the Umubano Group, which currently has 11 members. Both are usually further away from the headquarters than the Sabyinyo and Agasha groups, but easier to reach than the Susa Group.

Originally studied by Dian Fossey, the Susa Group was the largest, with about 40 individuals, including 3 silverbacks. After a split (creating Igisha Group) in 2009, Susa now has 28 members. In the summer months in particular it can be a tough trek to reach this group high up on Mount Karisimbi, but it’s well worth the effort because of their number and because, uniquely, it has two sets of twins, which is very rare.

The Karisimbi Group, which split from the Susa group a few years ago, also lives in the Mt. Karisimbi area of Volcanoes National Park and is also suited to visits from more serious hikers. Both of these groups can potentially involve a full day’s trek. This group also underwent a split in 2012, and now has 11 individuals.

The Hirwa Group has around 11 members including one silverback and another pair of twins. Together with the two pairs of twins in the Susa group, these are the only known surviving twins of mountain gorillas in the world. They’re also usually found on the slopes of Sabyinyo, and tend to be one of the easier groups to trek to.

The Kwitonda Group has 18 members and was habituated in the DRC. They crossed the border into Rwanda in 2005, and were carefully tracked and are now also being visited on a regular basis, although they are known to range far.

The Bwenge Group, named after their silverback, has 11 members and can be a tough trek – they’ve had a lot of in-fighting and have lost a few family members, and they move around a lot, and faster.

The Ugende Group do the same, so it’s often a harder trek. The name means “on the move” – its 11 individuals shift regularly.

Isimbi Group were formed after the Karisimbi group split in 2012, and includes Poppy, the oldest living female (though she went missing at the end of August 2018, so her future looks a little uncertain). They have 14 members.

Encounter the Mountain Gorillas in Rwanda