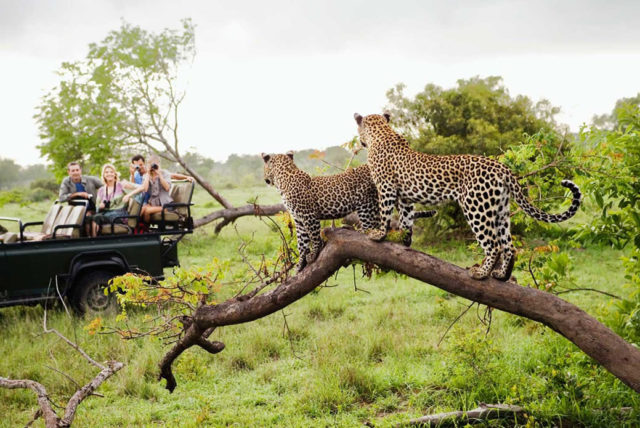 The Kruger Park in South Africa has two main seasons; a dry winter from April – October, and a wet summer from November – March. So what is the best time to travel to Kruger? The park is known as an all-year destination, but the different seasons will have a definite impact on your safari. So when you are planning your safari, you should keep two things in mind: What season will you be traveling, and which part of the Kruger Park will be the best for that season? In this post I will try to help you with this part of your safari planning!

Winter in the Kruger Park

The winter is known to be the best time of the year for safaris in Kruger. Though, that depends on the fact that your prefer abundant wildlife over beautiful scenery. The winter is also the dry season in Kruger, which means that the leaves fall of the trees and rivers and waterholes dry up. Only some permanent waterholes stay wet, and it is around these that you will spot the hordes of animals. And that is exactly the reason why the winter is best for wildlife watching. The animals are in the park all year, but during dry season the wildlife concentrates in smaller areas and make them easy to find for us tourists.

Winter season is roughly from April to October, but April will still be fairly wet, so if you’re looking for the advantages of the dry season you should probably schedule your safari between June and September. The later you go, the drier it will be. That means that the landscape will be brown with practically no leaves or vegetation. This makes game viewing easier, as it is less vegetation to obstruct your sight, but it also makes the scenery less interesting.Temperatures during winter are comfortable in day time, but cold at night! So bring some warm clothes for the early morning and late evening drives!

Summer in the Kruger Park
Traveling to the Kruger Park in the summer season will give quite a different experience. As with the winter, the later in the season you are traveling, the more pronounced it’s characteristics will be. In spring and early summer, October – December, as the thunderstorms start rolling in, the much needed rain will spark life to the vegetation. Leaves will quickly start growing and the landscape will soon turn green again!

Along with the rain comes the heat (or opposite, the rain comes with the heat), and you might want to stay away from the hottest areas where the temperatures often can reach 40 degrees Celsius. To avoid those extreme temperatures you can aim for the southern part of the Park, which is at a higher altitude and has slightly lower temperatures and more rain to cool you down. And even though the wildlife might be harder to spot during summer, this is still a magnificent time to be a tourist there. The green and lush vegetation creates a beautiful scenery in this dramatic mountainous landscape! So if you’re there during summer you should consider to cut a day or two off your safari to rather explore the Panorama Route just west of Kruger’s southern parts.

Early summer has another attraction as well, and this can make your safari a truly special experience: Most animal species have their babies during spring and early summer to gain full advantage of the wet season. So if you’re lucky you get to see lots of tiny little baby animals running around!