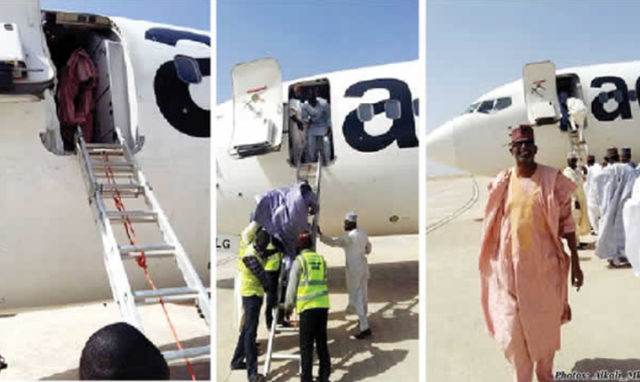 The state of Nigeria’s aviation sector has recently scraped a new low; on Saturday, passengers on-board an Aero Contractors Airline were forced to alight the airplane with the use of a ladder at Sir Abubakar Tafawa Balewa International airport, Bauchi.
As reported by PUNCH, the flight touched down at 10:42am in the absence of marshallers and ramp officials. At 10.57am, passengers were still stuck in the aircraft and when the crew contacted the controller to find out why they were yet to position a stairway for the aircraft, they were informed that the necessary piece of equipment was faulty but provisions were underway to sort it out.

With no way to disembark the airplane, already agitated passengers got furious, including a groom and his wedding guests. “At that point, the captain explained to them that he may have to take them back to Abuja as they cannot disembark due to lack of stairs. But they insisted that they cannot be kept on board the aircraft,” explained Aero’s Acting Managing Director, Captain Russell Lee Foon.

The only alternative that could be provided by the fire services was a ladder, which the passengers opted for against the wishes of the captain and crew members.
So far, the management of Aero Contractors and the Federal Airports Authority of Nigeria (FAAN) have gone back and forth over liability for the incident. The airline stated that it was assured of adequate ground handling services by the airport manager in Bauchi before it embarked on the flight from Abuja. Captain Russell Lee Foon, told journalists that the airline’s Head of Ground Operations, Mr. Peter Omata, confirmed the handling of the flight through the airport manager, Mr. H. Abubakar.

In reaction, Yakubu Dati, the General Manager, Corporate Affairs, said FAAN is not liable for the ladder incident. “The Bauchi Airport is managed by the Bauchi State government and FAAN only provides statutory services at the airport such as aircraft marshalling, aviation security services and fire cover. The authority does not provide handling services for Aero Contractors and therefore does not understand why it should be held responsible for the non-provision of appropriate equipment for passengers’ disembarkation,” he said.

Responding to the statement made by Yakubu Dati, the office of the Bauchi State government released a statement denying culpability. Yakubu Muhammad, the Special Adviser to Bauchi state governor on media, said FAAN and not the state government is responsible for the maintenance and management of the airport.

In the face of such an embarrassing situation, it is disappointing that no agency is willing to admit responsibility, but what is more disappointing is the fact that three months ago, the Nigerian Aviation Handling Company (NAHCO) announced its deployment of N1.5 billion worth of equipment to enhance airport operations across Nigeria.

According to Ahmed Bashir Gulma, Head of Corporate Services of NAHCO, the ground support equipment (GSE) being deployed were state-of-the-art, aimed to satisfy domestic and international clients.

The country’s aviation sector is in dire need of a revamp; Nigerian aircrafts and airports are infamous for their abysmal state, earning them the tag – flying coffins. It was therefore no surprise that three of the country’s international airports were ranked amongst the worst in Africa back in 2014.

Nigeria’s Minister for Transport, Rotimi Amaechi, and Senator Hadi Sirika, Minister of Aviation for State, both have their jobs cut out for them, just like everything else, the country’s aviation sector needs change.