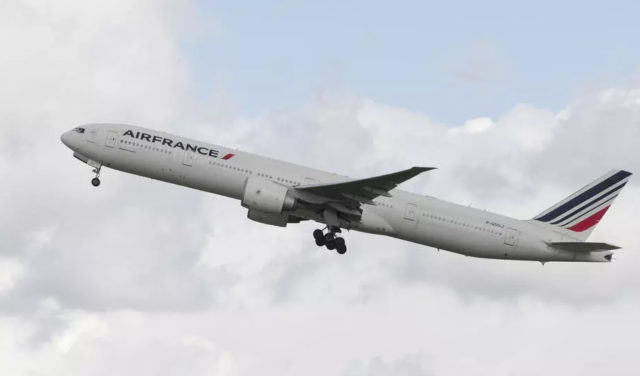 An Air France flight from Mauritius to Paris was forced to make an emergency landing in Kenya early Sunday after a suspected bomb was found on board, police said.
Navy and police bomb experts were called in to determine if there were any explosives on board the plane, which had 459 passengers and 14 crew members aboard.
Many countries are on alert for possible attacks, including France which was hit by a series of deadly shootings and bombings in Paris in November that killed 130 people.

Flight AF 463 left the Indian Ocean island of Mauritius at 9:00 pm (1700 GMT) on Saturday and had been due to arrive in Paris Charles de Gaulle at 5:50 am (0450 GMT).
But it made an emergency landing at Moi International Airport in Kenya’s southern port city of Mombasa at 12:37 am (2137 GMT) “after a device suspected to be a bomb was discovered in the lavatory,” police spokesman Charles Owino said.

“An emergency was prepared and it landed safely and all passengers evacuated.”
When the plane landed, passenger John Stephen said crew members helped safely evacuate people emergency slides.
“We felt the crew member was pretty tense, something was probably wrong at that time. When the plane stopped he told us to run away to take the slide, to run away from the plane,” Stephen added.
“We don’t know anything more about this bomb or not, but something looked like a bomb was in the toilet.”

– Investigation continues -Kenyan Interior Minister Joseph Nkaissery, who arrived in Mombasa, said police were questioning a number of passengers but did not say how many.
“They are speaking to the passengers… who were near where the device was,” Nkaissery said.
He declined to give any information on the kind of device found aboard the aircraft.
A French police source said initial investigations had failed to establish if there was a bomb on board.

Navy and police bomb experts were called in and took the device “which they are dismantling to establish if it had any explosives,” said Owino.
The plane remains at Mombasa airport.
“We still do not know what type of object it was,” an Air France spokesman told AFP, adding that the company remained in contact with the Kenyan authorities.
“At this stage we have no confirmation from the Kenyan authorities that this is a kind of explosive device”, the spokesman said, adding that “investigations are continuing”.

Air France planned to fly the passengers to Paris from Mombasa on another flight later on Sunday.
While the airline “regrets the inconvenience and the delay that was caused to its customers,” its “priority is to ensure the safety of its passengers,” the spokesman said.
Kenya Airports Authority said in a statement that scheduled flights to Mombasa airport were briefly suspended but normal operations had resumed.