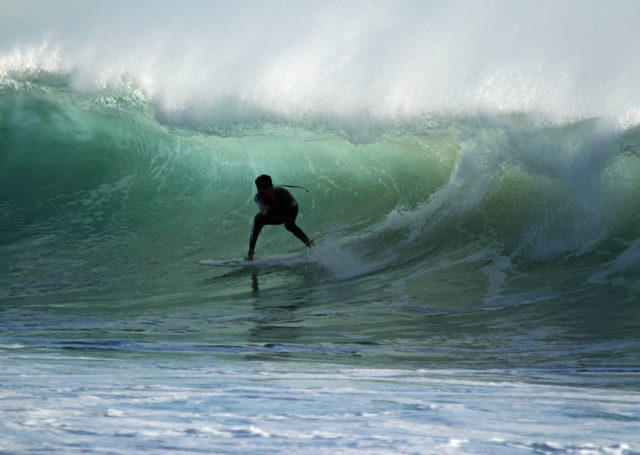 The African continent has many possibilities for a holiday, with the spectacular landscapes of Southern Africa, the Safaris in East Africa and yet to be really well developed Northern Africa, whereas West Africa is still not so popular with tourists. The greatest attraction of West Africa lies in its location, as it faces the Atlantic to the west and that is a major plus point which other places in Africa don’t have. It is thus a hidden treasure for surf enthusiasts!

There are five specific spots where one can go for surfing in West Africa: The Alamdies and N’Gor Island in Senegal, Ponta Prenta in Cape Verde, Busua in Ghana and Rosbertsport in Liberia.

Senegal: The Almadies and N’Gor Island
Almadies Peninsula, on the outskirts of the Capital Dakar, is a favourite with surfers who come straight to this place. It is the westernmost tip of Africa that juts out into the Atlantic and is one of the most important swell windows of the world which appear from the SE and taking an almost 2600 turn all around the peninsula go to the North. It is easy for you to go across to most of the favourite surfing places as they are very closely located within walking distance of each other.

N’Gor Island is an attractive spit of land and has cobbled streets, restaurants, bars and beaches and many surf camps. In 1964, two persons from California first brought surfing to West Africa in this area while filming the surf travel movie Endless Summer. A surf camp with the same name as that of the movie shot is located here and caters to international surf tourists. The waves at Virage or Yoff beach are gentler and so the place is good for beginners. Beginners can also take lessons in surfing from Tribal Surf Shop in Virage.

Cape Verde: Ponta Prenta on Sal Island
Cape Verde archipelago has a strategic location in the mid Atlantic and is one of the best surfing destinations in the world where there are plenty of well established surfing camps. Both amateurs and experts have enough to prompt them to keep coming back here for more.

Ponta Preta lies west of Santa Maria and is an exposed reef and point break that that has pretty consistent surf. It is accessible by a remote road which is functional only for sometime during the year. It is surrounded by rocky ledges and is a Reef break so that it makes for a good surfing area. Some experienced surfers even compare it to the Hawaiian pipeline. In fact winters is the time favoured by surfers when it gets the greatest wave breaks. Fine surfing waves are formed by off shore winds and Atlantic wind swells.

Santa Maria is the place to hire surf boards, besides jeeps can also be hired there to reach for the best wave breaks.
It is a major wave surfing destination and Josh Anglulo the Hawaiian 2009 PWA Wave World Champion, who has done much to promote windsurfing in the archipelago, has now settled in Cape Verde.

The topography of Ghana’s coastline is a mix of beaches and coral reefs which is why Ghana is a superb surfing destination. Ghana, located on the Gulf of Guinea, only a few degrees north of the equator has a warm tropical climate. Busua is a coastal town that boasts of a variety of hotel accommodation, small seafood restaurants, and a long sandy beach that is clean and safe for water sports. You’ll find there a “Black Star Surf Club” at the beach. The surf camp has relaxing and attractive accommodations and there are many entertainment options and group activities too on the beach that make your stay very enjoyable. Although surfing is a new activity in Ghana, the team of experienced instructors at surf camp provide surfing lessons with good results. The training is in keeping with your level of skills and the instructors help to improve your surfing ability no matter whether you are a beginner or advanced learner.

In Liberia: Robertsport
Robertsport is a place in western Liberia, located 50km north of Liberia’s capital Monrovia. The landscape is green with undulating hills, large plantation style houses that remind you of the southern part of America. The town can be approached by road, aptly described as ‘the best dirt road in the country’ and is considered as the best unknown West African surf spot (in season).

It is a town mostly inhabited by fishermen and farmers. Of late there have been a small but growing number of world class surfers from other countries who have heard about this spot and are helping to develop the area as a surfers’ delight besides some self taught locals who frequent the spot to enjoy surfing on the waves. There is nothing more than the basics on offer. It is typically a page out of Adventures of Robinson Crusoe with surfers’ tents pitched under a large cottonwood tree and meals in barbeque style on an open fire or lives in Nana’s lodge which offers raised wood floored structures.