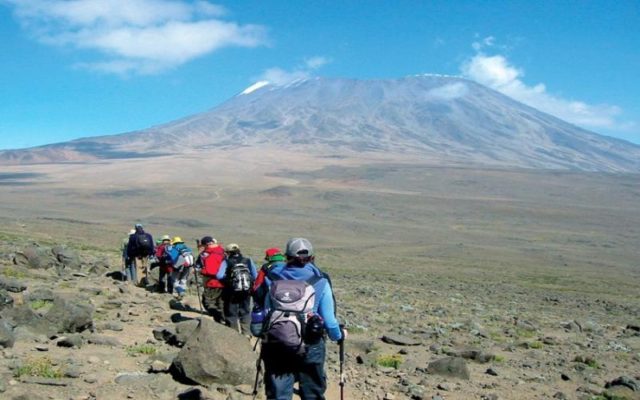 Mount Kilimanjaro is the highest freestanding mountain in the world. Any reasonably strong and ambitious person is bound to conquer it.

Snow-capped Kilimanjaro, floating above the clouds is no doubt one of the most beautiful and impressive sights in the natural world. Even hard-boiled non-believers, in their unguarded moments, empathise with the Maasai who call it the “House of God”. The mountain is one of the Seven Top Summits of the world –it has the highest point on the African continent. Though there are higher mountains, they form part of mountain ranges, Everest for example. But Kili, as it is popularly known, is the highest freestanding mountain in the world. It rises gently from 3,000 feet, reaches for the heavens and only halts after a 16,000 feet ascent. The diameter at the base is an amazing 64 kilometres.

Kilimanjaro is located to the northeast of Tanzania, on the border with Kenya. There is a popular myth of how the mountain came to be part of Tanzania, which was at one time part of the German Empire. Queen Victoria is supposed to have granted the mountain to her German grandson Wilhelm (later Kaiser Wilhelm II) as a birthday gift. It is also said that the Germans had been grumbling at the blatant unfairness of missing a snowcapped mountain within their empire while the Queen has two – the second being Mount Kenya.

Though historians have discredited the myth, it has refused to die and it is still a source of amusement for many. Unwilling to allow the truth to stand in the way, some anti-colonial historians fume with indignation, citing how the boundaries of Eastern Africa were arbitrarily decided in the capitals of the imperial powers. To most people in the west, Kilimanjaro has long been associated with Ernest Hemingway on account of his 1936 short story “The Snows of Kilimanjaro”. In 1952, Hollywood fascinated by the magic of Kili the book evokes, turned it into a movie with Gregory Peck and Ava Gardner in leading roles.

Kilimanjaro is young as far as mountains go, and geologists allow it only 750,000 years. The mountain is made up of three dormant volcanoes -Kibo (19,340 feet), Shira (13,000 feet) and Mawenzi (16,896 feet). Kibo occasionally belches some steam and sulfur. The highest point on Kibo is Uhuru Peak, where you see some awesome glaciers and fantastic views of the country below. Though Kili is only three degrees south of the equator, the peaks of Kibo and Mawenzi are covered in ice and snow year round. Many learned people in Europe hotly disputed that a snow-capped
mountain could be found at the equator when the German missionary Johann Rebmann reported it in 1849.

Going up the mountain, you move from tropical to artic conditions. There are five distinct climatic zones, with each zone taking approximately 3,300 feet. The zones are- the lower slopes, then forest, then moorland, alpine desert and the summit. The lower slopes are cultivated and agriculture flourishes. The forest region is dry in the north and wet towards the southern slopes. The forest carries many tree species including podocarpus, camphor, fig and olive trees and bamboo. The only animals to be found here are blue and Colobus monkeys and a variety of birds including hornbill and turaco. At the moorland region, you find the giant groundsels and lobelias common in the high altitude mountain regions of eastern Africa. Further up, vegetation and animal life are sparse.

Kili is the worlds’ most accessible summit. Any reasonably strong and ambitious person, without using any special mountaineering equipment can conquer this giant. It is however hard work. Altitude and the resulting thin air will be the main challenge and not your failing strength. To avoid succumbing to high altitude sickness, you guides will constantly advise, you take the mountain slowly, slowly or “pole pole” as they say in Swahili. You should therefore avoid a quick ascent and take time to acclimatise to the mountains’ oxygen challenged air. By ignoring such good advice many young males fail to reach the summit, when older more deliberate climbers make it.

To enjoy the natural beauty and majesty of Kili, you do not even have to climb it. By using a four-wheel drive vehicle, you can ascend to the Shira Plateau, which is perched at 12,000 feet. The first person recorded to have reached the summit is the German climber Hans Meyer in 1889. Unlike today’s climber, he did not have the benefit a route map and he only made it on the second attempt. Having been taught a lesson in humility, for the second try, he brought along an Alpine expert and a local guide. Meyer named the summit after the Kaiser Wilhelm II, but this was years later revised to Uhuru or freedom in Swahili. Since the days of Meyer, the icecap has receded and scientists worry that it will vanish altogether in 20 to 50 years. So, hurry up and climb Kili while it is still such a pretty sight.

Today, few climbers few use the difficult route pioneered by Meyer. The climb normally takes five to six days and involves four to five overnight stays in comfortable mountain huts. The Marangu route, which was established way back in 1909 is the easiest and most popular and is used by over 90% of climbers. Experienced climbers prefer the more scenic and difficult Machame route. Climbers are not entirely without a sense of humour and they refer to Marangu as the coca cola route, and Machame as the whiskey route. Other routes are Shira, Mweka and Umbwe.

Shira is a scenic route that takes you through the Shira Plateau,which you reach by four-wheel drive vehicle. The route gives you great views of the Rift valley and Mount Meru. Using Mweka, you reach the summit and return to base in 4 days. But as you may suspect, it is quite steep and therefore not easy at all. The Umbwe route is even steeper and quicker and you take only three days up and down. The route is spectacular, but it is for the fit and experienced and not casual climbers. In addition, there are technical routes such as the Western Breach and Lemosho routes.

Regardless of the route you pick, all Kili climbs start at Marangu Gate. This is where you get your permit and pay entry fees. On the typical Marangu route climb, spend four nights up the mountain. The route is clearly marked right to the summit. You start by trekking through the forest zone to Mandara Hut (9,000 ft) for the first night. Onward through moorland, you halt for a second night at Horombo Hut (12,450 ft). Then through the alpine desert, your third night finds you at Kibo Hut (15,450 ft). But you really do not sleep there as you go for the summit just after midnight. You then descend back to Horombo Hut for your last night after an overall trek of about 77 kilometres. If you want to spend more time up high to acclimatise, you can overnight twice at Horombo Hut.

On the Machame route, you spend one night more on the mountain.You overnight at Machame Hut, Shira Hut and Barranco Hut. You connect to the Mweka route and continue to Barafu Hut. After tackling the summit, you descend for your last night at Mweka Hut. On the next day, you rejoin other mortals at the base of the mountain. You are advised to pick the route that best fits your experience. Most aspire to reach Uhuru Peak – the highest point on Kibo -and indeed all Kili. Others are satisfied with Gillman’s Point, the slightly lower peak on Kibo. But Mawenzi, actually lower than the Kibo peaks, is more jagged and requires mountaineering experience. Many climbers find scaling Kili, whatever height they reach, a very satisfying experience.

But do not be too disappointed if you do not reach the summit.Different estimates indicate that only 15-30% of climbers get to the top. Climbing Kilimanjaro is for those who are physically fit and mentally prepared. It is your ability to muster that extra dose of determination that will count when the going gets tough. In terms of physical preparation, start by taking hikes uphill with a pack strapped on your back. This rehearses the climb, minus the altitude of course. Think also of putting in some aerobic training at the gym and by jogging. If you are having heart or lung problems, better not risk the climb. In all cases, it is a good idea to talk to your personal physician to ensure that you do not bite more than you can chew.

It is best you buy a climbing tour package to take advantage of those with local knowledge. The typical package will bundle together: return transfers – Moshi or Arusha to Marangu Gate, park and rescue fees, services of guides, porters and cooks, accommodation in mountain huts and all meals on the mountain. In addition, you need to hire locally or bring along equipment and sleeping bags. Some useful stuff to gather include – waterproof hiking boots, rain suit, flashlights, sunglasses, prophylactics for high-altitude sickness, hand gloves and night shoes. You need a daypack to carry a few essentials, as the porters carrying your equipment will usually hike their own way. Some items to carry on your back include bottled water, extra clothes, camera and sunscreen. Besure to review and book our very good value Kilimanjaro Climbing offers.

You can climb Kili, any time throughout the year. But it is obviously less fun during the March to June period when it rains the most. The second and lighter rains come from late October to early December. The best time is when it is warm and dry – January, February and September. July, August, November and December also good, though cooler. Due to the variation of conditions along the route- from tropic to arctic – it is convenient to dress in layers you can either shed or add on. Generally, in the northern Tanzania region, you can expect temperatures to average from 15°C in May to August and 22°C over December to March. At the mountain, temperatures drop by roughly 1 degree Celsius for every 650 feet ascended.

Many climbing enthusiasts want Christmas and the New Year to find them up the mountain, and unless you book early, it is difficult to get a slot. The best way of relaxing after the trek is by taking a safari in the unrivalled wildlife sanctuaries of northern Tanzania or heading to the beaches of Zanzibar. We have covered these attractions in earlier editions of this newsletter here.

You can book your safari or Zanzibar stay and Kili climb together – have a look at our Tanzania Safari and Zanzibar Hotel offers. If you want to put together your own safari, then visit the Tanzania Car Rental and Tanzania Hotels and Lodges pages of our website.

Kilimanjaro is 475 km to the northwest of Dar es Salaam. The base for climbing Kili is nearby northern Tanzania towns of Moshi or Arusha. Kilimanjaro International Airport services the region. But it is usually cheaper to disembark at Nairobi in Kenya and then to take a shuttle bus to Arusha.

Experience the Great Pyramids of Egypt

Visit the Source of the Nile in Uganda