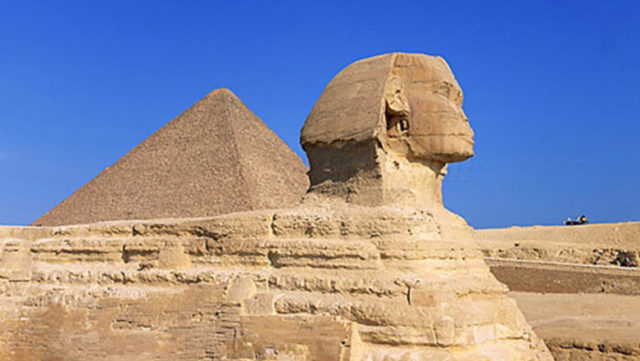 From their construction throughout the centuries the Pyramids of Giza have represented mystery, wonder and awe to all. They are perhaps the only great architecture of the ancients to have survived more or less completely intact.

The oldest pyramid at Giza is the Great Pyramid of Cheops, also known as Khufu, and is the largest known pyramid in existence. It was built around 2500 BC of over two million limestone blocks, each almost three tons in weight. An astonishing achievement and is believed to be the work of around twenty thousand slave workers.

Nearby are the smaller pyramids belonging to Cheops’s son and grandson as well as the Great Sphinx, known as Abu ‘l-Hol, a half-lion, half-man figure of majestic proportions.

Each evening at dusk an enormous sound and light show is played out and, despite its rather tacky touristy nature, is a real fast-track introduction to Egyptian history. Scout through the many persistent camel drivers around the site for a decent tour of the pyramids on humpback, with the best time of day being at daybreak or sundown as these times are quieter and offer the most breathtaking atmosphere to view the pyramids in.

As perhaps the best possible example of real estate location the forty acre Mena House offers rolling views of lush parkland and beautiful gardens right on the Saharan doorstep with the pyramids as a backdrop. Before 1870 the Mena House was King Khedive Ismail’s official hunting lodge, yet today it offers serene escape from the heady tourist areas that surround the Pyramids. Featuring and eighteen hole golf course, a gorgeous swimming pool set right in the lush gardens, and a certain aire of colonial grandeur felt perhaps most on the breakfast terrace, which Evelyn Waugh described best as being “like having the Prince of Wales at the next table”. To enjoy the Mena best choose a room in the old yet beautifully restored suites for a grand view of the Pyramids.

Visit the Source of the Nile in Uganda