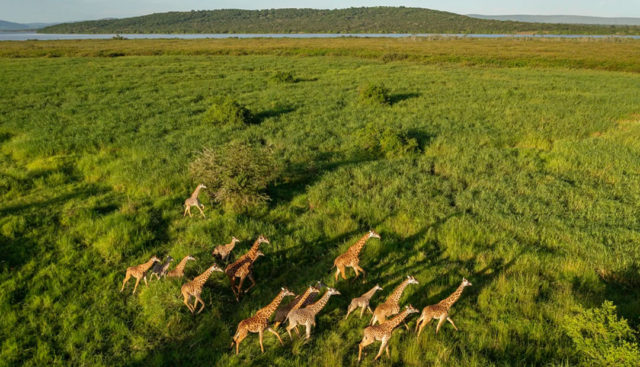 Are you planning to go on a safari to Rwanda? Would you like to go on  a traditional safari in a game park? Why not go on a safari in Akagera National Park? The park is located in the north eastern part of Rwanda bordering Tanzania and it is named after the river that runs through it, River Akagera. The Akagera River feeds into a series of lakes, marshes and papyrus swamps that constitute central and eastern Africa’s largest protected wetlands. The park was gazetted in 1934 with extremely diverse variety of habitats, wildlife and birds, and some lovely scenery.

Historically, the park was among the large protected areas in East Africa covering 2700 sq. km in 1997. However with time the park reduced in size by 50% due to reallocation of refugees returning to Rwanda after the civil strife of the genocide.  Th settling of refugees not only affected the land through cultivation but also affected animals by poaching.

What is the best time to Visit Akagera National Park?

Dry season is the best time to visit Akagera National park. This is because when it is raining, it becomes hard to drive through the park for wildlife viewing thus heavy rains makes the trails too slippery as well wildlife viewing is hard during rainy season compared to dry season. The best time for a safari to Akagera National Park is during the months of December to February and then June to October which is relatively drier than March to May and November.

You will drive 500 meters from Kigali towards Kigali Airport, you will turn left heading east of Rwamagana, You will then continue through Rwamagana to the roundabout at Kayonza. Once you reach Kayonza round about you will turn right and continue for another 15 km to Kabarondo then proceed to Akagera National Park main entrance. The drive from Kigali to Park will take you 2 to 4 hours if you are using public means but travelling in a private safari vehicle takes 2 to 3 hours.

Where to stay in Akagera National Park?

Reasons why the park is visited

Due to the fact that Akagera national park was named after river Akagera, visitors except a boat cruise and which is one of the best activities in the park. Take boat trips on Lake Ihema which seemed to be full of hippos and crocodiles and saw plenty of aquatic birds. The rare shoebill stork eluded us. Akagera is, a big game haven as Herds of giant elephants and buffalos come from the woodland to the lakes to drink some water and actually lucky visitors can come across a spotted hyena, a leopard, or even a lion. Giraffes, zebras, antelopes like the chestnut-coated impalas, oribi, bushbucks, Cape elands as well as the tsessebe can all be seen in this park during the boat cruise.

Within the park, there is wide variety of birds over 520 species. Bird lovers not only enjoy the beauty of birds but also listen to its sounds. The park has endemic bird species which include threatened papyrus gonolek, the elusive shoebill stork, Lesser Kesterel, the Armot Chat, the Red Faced Barbets, the Great Snipe and Swamp Fly Catchers. Other species include: fish eagles, Grey-backed Fiscals, Cattle Egret, Black-headed & Viellot’s Black Weavers, Hamerkop, Pied Crow, Sacred & Hadada Ibis, Long-crested Eagle and the Augur Buzzard.

The game drives here are conducted in the early morning or in the late afternoon lead by tour guides in 4WD safari vehicles. During the game drive, most visitors enjoy their safari more due to spotting of different species like zebra , elephants, elands, topis, lions, giraffes, monkeys, savannah birds, civets, watching herds of buffalo leopards and the hyena. And around the rolling hills and valleys in the south, we were amazed at the calmness of a whole gamut of antelopes, spotting mutwara the notoriously grumpy elephant which are rare in other parks.

Fishing would be one of the extra ordinary activities to be carried out along the shores of Lake Shakani and Lake Ihema; you will hear the snorts of the hippos as well as the singing water birds, plus the sounds of the fish in the water done. Thus giving you a thrilling experience during fishing that you will enjoy the sights and sounds of various birds and hippos, the catches during fishing can be roasted or grilled for you to enjoy the fresh fish from Rwanda.

Get started with planning your next wildlife safari in East Africa with Africa Tours Adventure an adventure travel company operating in Uganda, Rwanda and the Democratic Republic of Congo (DRC).

Top Reasons Why You Should Visit Uganda

5 Best Cars to Rent for Family Safaris in Rwanda